In Azure Automation when onboarding a server you have a choice whether to “Reboot Node if Needed” which many tutorials will suggest you should tick.

However you might wonder what about production servers, do you really want them to reboot themselves? 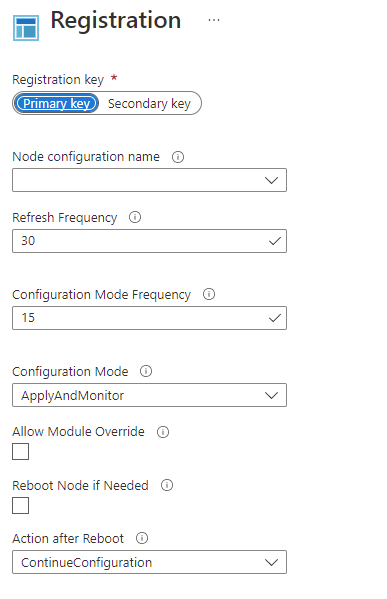 Of course you could initially onboard a server with the Reboot ticked if needed for initial setup and then re-onboard it with it unticked so that once in production it doesn’t get rebooted. But what if you forgot to change it? For this reason I’d rather onboard Prod servers without automatic reboot.

So I wondered, what actually is the experience if you don’t tick the box but the node requires reboot? Is it still possible to apply configurations that require reboot but manually rebooting? How would you know when the reboot is required?

What I found was the node gets “stuck” in “In progress” state:

If I click into the node then (after some time has passed) I see that no status is shown even though reports are coming through (normally these would show Compliant or Failed):

If I click on either of these then it says:

So there are no failures logged it just is unable to state if the configuration is fully applied or not.

On the server I tried to interrogate the DSC status:

It isn’t totally clear that the node requires rebooting. But if you are aware that this is the reason the configuration “has not converged yet” then it is easy enough to manually reboot the node.

After reboot, the node goes to (in my case) Failed or Compliant like usual.

So it is fine to not allow reboot keep in mind that the node will show In Progress indefinitely until rebooted if this is required by the configuration. At least this is the case with my example that is waiting for WebAdministration role to be installed